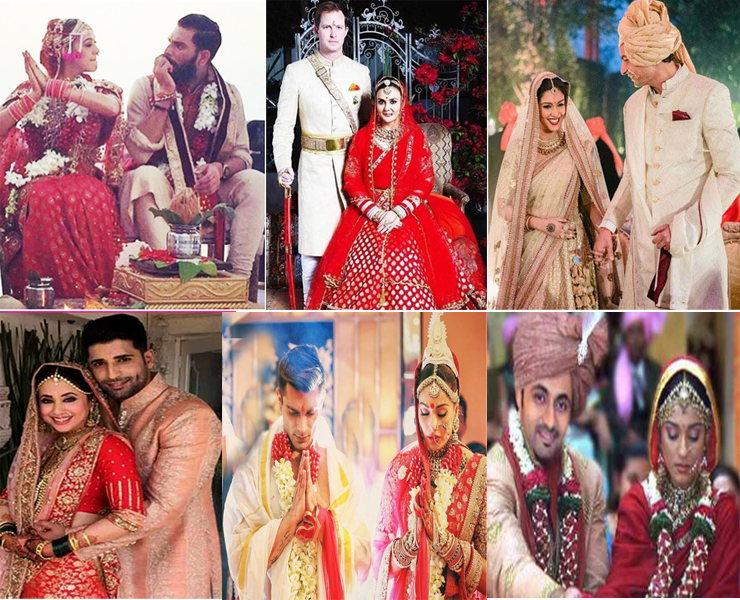 Preity Zinta and Gene Goodenough: Preity Zinta was one of the most popular Bollywood actresses. She got married to Gene Goodenough, who is financial analyst. They tied the knot on February 2016 in Los Angeles. Gene and Preity dated each-other for almost 18 months before taking this decision.

Asin Thottumkal and Rahul sharma: Asin who started her career with South Indian Movies and established herself in Bollywood as well. She has worked with some of the A listed directors and actors. She got married to Rahul Sharma, CEO of Mircomax. Their wedding was not less than a fairy tale. Their wedding was a close family affair, their close family members and friends attended the wedding ceremonies which were done in Christian tradition and Hindu tradition as well. However, after their wedding they throw a lavish reception, which was attended by Bollywood biggies and other dignitaries.

Bipasha Basu and Karan Singh Grover: This is one of the most talked about and hyped marriages of 2016, who made buzz in almost all newspapers, TV channels and magazines. What also made this wedding talk of the town was the picture of the couple post wedding which they posted from time-to-time on social media. The wedding and reception held on the same day and both the ceremonies were attended by almost all Bollywood and fashion industry people.

Amrita Arora and Anmol: The girl next door of Bollywood, Amrita tied the knot with her long-time boyfriend Anmol on 15th May, 2016 in a close nit ceremony. They first time met each-other when Anmol was interviewing Amrita. They dated for almost seven years before tying the knot.

Urmila Matondkar & Mir Mohsin Akhtar: This year B-Town’s cutest beauty tied the knot with Kashmiri businessman Mir Mohsin Akhtar. They got married in very hush-hush manner where a few of their close friends and family members attended the wedding ceremonies.

Yuvraj Singh and Hzael Keech: Yuvraj Sing rings the wedding bell with Hzael Keech on 30th November, 2016. Their wedding was talk of the town because they got married on 30th November as Hindu ritual and organized second wedding function on 2nd December, 2016 which was a lavish affair. In their wedding several legendry cricketers and Bollywood celebrities mark their presence.