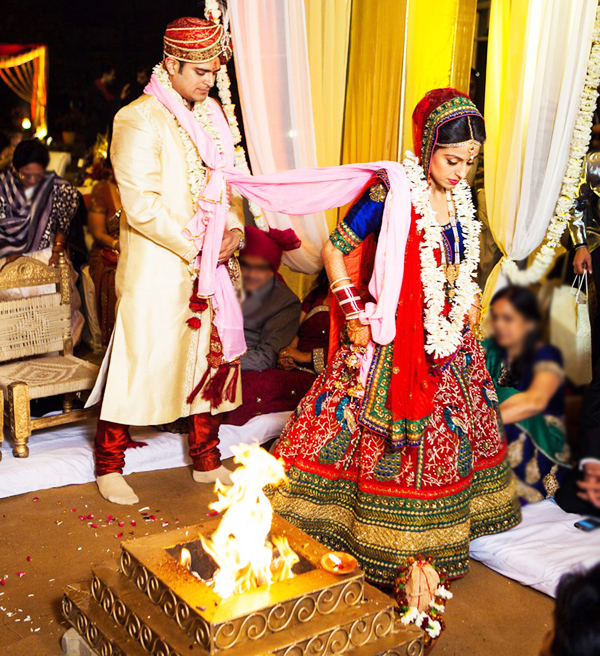 Ganesh pooja: Most of the Hindu families begin their wedding rituals by invocation to God Ganesha, the Hindu god of wisdom and salvation. The main logic of invoking him was to remove all future obstacles from the wedding ceremonies. You can perform a Ganesh pooja anywhere from a few days before the wedding day.

Arrival of barat: The wedding procession from the groom’s side which include groom’s family members, relatives and friends. Barat is also known as vara yatra, which has a long procession including band, dhol and other drums. The bride’s parents, brother, male members of the family greet them with akshat, tilak, aarti and garland and welcome them to the wedding venue.

Kanyadan ritual: The bride is generally led to the wedding mandap by her brothers or maternal uncle, where the groom waits for her with her parents. The bride’s parents offer their daughter in marriage in a pious and solemn ritual known as kanyadan in Hindu matrimony.  Her parents wash their feet with milk and water purifying them for their new life together. Hindu bride and groom hold their hands open and the father of the bride holds his open palm over their hands. The mother of the bride then pours water over her husband’s hand that subsequently falls on the hands of the bride and groom.

Saat phere/ saptapdi: In this ritual, the bride and groom take seven rounds to the sacred fire of havan. This is very important ritual and takes place tying the mangal sutra. Every phera is important and has its special meaning. After this ritual the bride-and-groom are lowfully wedding.

Aashirwad: This is the symbol of end of the wedding rituals. After completing the saat phera, the bride and groom touches the feet of their elders and take blessings.