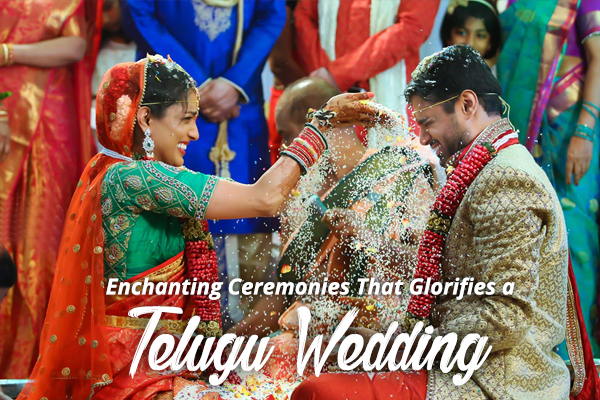 Appealing rituals that exalt Kamma wedding in India is a realm of culture and tradition, neither you nor I can deny that. And of all the holy customs, Telugu marriage tops the rank. This is because ‘A wedding’ is just not only a ceremony to unify a boy and girl in Telugu matrimony. It’s a promise of two endearing souls in heaven, hand-in-hand for a “Together forever” commitment and an exhilarating celebration of two families and well-wishers for a new beginning. So the occasion certainly deserves to be extremely grand and mind-blowing if I am not wrong. You can also take help of Telugu matrimony sites that help people to find desired  Telugu brides and groom.

Snathakam Ceremony for the Groom

This is a popular rite called Snathakam which is done prior to the wedding day in the house of the groom. The groom is asked to wear a sacred silver thread on his body referring the termination of his bachelorhood and accepts the responsibility of taking over the welfare and well being of the family. He is no more a one man and there is a family whom he should take care of, to be more precise, he is a family man from now on. Some people refer the custom as “Upanayanam”.

This custom is a part of all Telugu weddings. In Tamil marriages this custom s known as Kashi Yatra. This custom adds joy to the viewers as the groom is asked to pretend as if he gets adamant in leaving for Kashi (a pilgrimage) and he is no more interested in marriage or any other earthly happiness. To add more to the fun the bride’s brother acts like pleading his brother-in-law to change his decision and sign the marital agreement with his sister to spend all his life with her.

The ritual generally takes place in all states and is refered to with different names in different states. In Tamil marriage it is known as Nalagu, whereas north Indians refer it as the Haldi ceremony. The turmeric is smeared on the body of the bride and groom which signifies the rite performed for the purification of the bride and groom.

After ending all the customs at home, the groom sets off to step into the marriage hall. Before that a sacred visit to the temple is mandatory. Isn’t it? But No! This is not as ordinary as before. A big day deserves everything big and special. So is the temple visit. And the groom should worship it for everything to go well in his life. A coconut with turmeric and kumkum on its head will be broken in front of the divine statue of God or goddess. And the holy tradition successfully ends with a puja.

Here comes the magical moment the groom will be longing for. You read it right! I meant the arrival of the bride. The maternal uncle of the girl accompanies her to the Mandap to bring together the couples made in heaven. A curtain will be placed in the middle of the bride and groom, a priest repeating the sacred mantras. Then, the tie knotting ceremony will take place, followed by the wedding rounds. The awesome moment begins with the priest giving Thali (Mangalsutra) to the groom reciting slogans beside. The holy thread that binds the two lives into one is placed right at the center of the bride’s chest. This is to indicate that the bride takes all her marital responsibilities and the love for her new family in her heart. Then they take seven wedding vows around the holy fire and it is believed that the couple is united in front of Panchabhutaalu (earth, air, water, fire, and sky). The customs and traditions hence demonstrate how solemn and vital a Telugu matrimony traditions are.