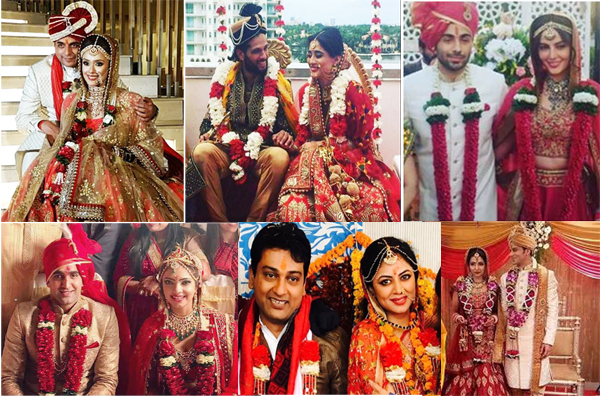 We all are very keen to know more about favorite celebrity and what is going on in their personal life. We always want to know about their hook ups and other personal information to know them closely. Like last year, the first three months of the year 2017 are full of celebrations and wedding bells for some for B-town and television industry celebrities. There are many Bollywood actors and telly-industry actors who enjoyed the wedding bells for them. Here, we are sharing the list of celebes who broke the heart of many and joined the married celebrity couple’s club.

Hrishita Bhatt & Anand Tiwari: The beautiful and gorgeous Hrishita has tied the knot with the beau Anand Tiwari, who is a senior UN diplomat. The couple knew each-other from last six months and they took the wedding vows on 4th March, 2017. Their wedding was very much a personal affair and attending by close family members only. But, they throw a lavish wedding-party in Delhi and Mumbai, which is attending by various dignitaries and famous Bollywood people.

Somya Seth & Arun Kapoor: Somya Seth who is popularly known as princess Kaurwaki of the famous historical saga of TV, Chakravartin Askhoka Samrat tied the knot with her long-time beau Arun Kapoor. This beautiful couple got engaged secretly in 2016 and tied the knot on 15th January, 2017 this year. They maintain their wedding a low-affair and completed all the ceremonies in hush-hush manner.

Mandana Karimi & Gaurav Gupta: Former Big Boss Contestant and heart-throb of many people Mandana Karimi got married with her boyfriend, Gaurav Gupta on 25th January, 2017 in a secret manner. They know each-other from two and half year and after dating each-other for such long time they decided to marry. They go for a close knit court marriage in the presence of only a few friends and close family members.

Kavita Kaushik & Ronnit Biswas: Kavita Kaushik is the one of the well-known name of Television industry. This versatile and talented F.I.R. fame actress tied the knot with Ronnit Biswas on 27th January, 2017. They have performed the marriage rituals in a Shiv-Parvati temple in Kedarnath. Their wedding was very much a private affair and attended by her best friend Aashka only.