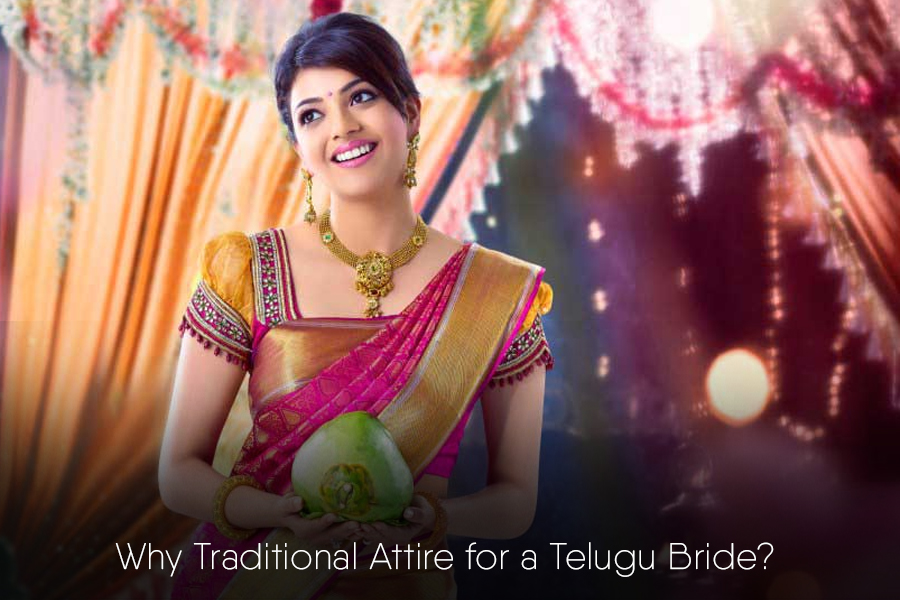 Indian weddings are bright and colourful feast and a Telugu matrimony strictly adheres to their customs and traditions running in their families. The people of Andhra and Telengana follow the culture of Telugu wedding.

In Telugu culture, bride or wife is given utmost importance in the society and is treated as equal partner of her husband.

A Telugu Bridal attire is the cynosure of all eyes attending the event and the focus of the people is on her costume, jewelry, hairdo, makeup and footwear. In one word, she has to be at her best traditional trousseau throughout the wedding ceremonies.

Sari is a staple attire of a Hindu Telugu bride and the bride has to wear different types of traditional saris for different rituals and ceremonies associated with matrimony.

Dharmavaram handwoven traditional silk sarees are in vogue among the Telugu brides. It comes in varied designs and colours in the bright hues of orange, royal blue, fuchsia pink or combination shades like maroon & green are much in demand. The other traditional silk sarees in demand are Venkatagiri, Gadwal, Kancheevaram, Mangalagiri or Pochampally Silk Saree.

The Telugu wedding bridal dress is a fun of nine yards drape with heavy golden border and south Indian design embossed on the traditional silk sarees to mark the wedding occasion.

Light weight chiffons are also used for pre and post wedding rituals but silk sarees are much in vogue in Telugu weddings.

The bridal costume at the time of final wedding when she is handed over to the groom by her parents is a traditional white silk saree with heavy red hued border. White and red combination is considered to be pious and sacred for the occasion.

Colorful bangles, heavy gold temple jewelry adorning the bride from head to toe which has antique finishing and depiction of gods and goddesses forms an important part of bridal attire.

Flower jewelry is profusely used to adorn the hairdo of a Telugu bride. A bright make up that adds sheen to her face is done with heavy eye makeup so that it gives her a pure goddess look. Bridal costume of a Telugu bride talks about the traditional and cultural richness of Andhra and Telangana states. Abride in Telugu bridal outfit is a beauty to watch and the memories of her bridal look can be cherished forever.

Lovevivah Telugu matrimony site introduces you to Telugu brides and grooms from Andhra Pradesh and Telangana State. If you are in search of a bride or a groom for your near and dear ones, log in to our matrimony site and your search ends here.