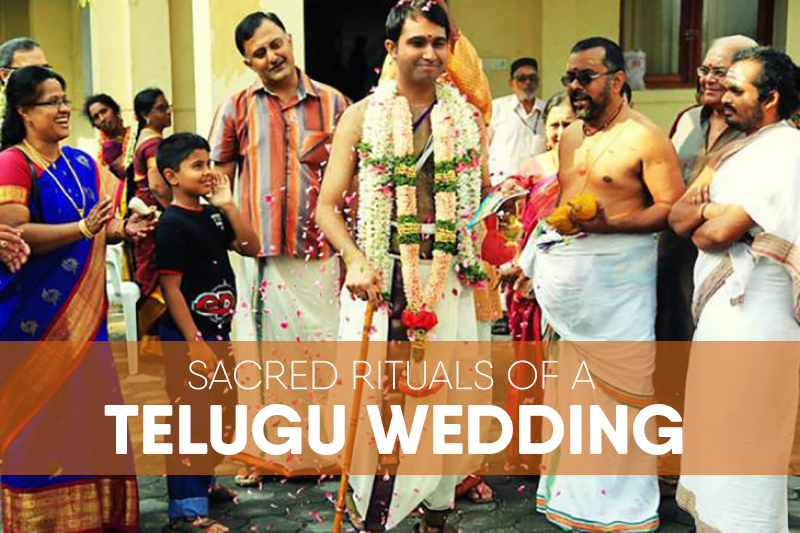 Every region of India follows a unique set of traditions and customs that are very specific to that place. That said, Telugu matrimony is quite similar to Tamil Matrimony in a lot of ways. A unique tradition that is followed in Telugu wedding ceremonies is that they focus not just on religion but also on spirituality.

In Telugu weddings, the ceremonies are considered to be incomplete until women participate in them. They are given the highest consideration and utmost respect where women are considered in family life and marriages.

Let’s check out some sacred rituals of Telugu weddings that make them so utterly holy, dreamy and pure!

In the ritual of Muhurtham, the auspicious date of the wedding is finalized by a priest with the elderly family members. It is pertinent to note that Telugu weddings usually do not happen during the months of Shunya, Asad, and Bhadrapad.

This ritual is quite similar to the Haldi ceremony that is performed in the Northern states. In this matrimonial ceremony, a paste is made of turmeric and oil which is applied to the body of both the bride and the groom. Thereafter, they both have to bathe properly and then wear fresh and clean clothes. The bride’s hair is also adorned with beautiful and fresh flowers.

The ritual of Snathakam generally takes place at the house of the groom. In this ceremony, the groom is supposed to wear a silver holy thread. This is an indication of his change in status from bachelorhood to a householder.

The Kashi Yatra in Telugu weddings is much like the same ceremony that takes place in Tamil weddings. In this ritual, the groom basically pretends to be going off to Kashi as a celibate. This is when the brother of the bride comes into the picture to stop him and asks him to reconsider his decision and marry his sister. The groom, of course, agrees to marry his bride after the persuasion.

In short, Telugu weddings are very rich in traditions and rituals. The prayers and worshipping are given utmost importance in Telugu weddings. So, if you are fond of this culture and are looking for a Telugu life partner, check out the matrimonial sites on the internet. You will find plenty of matrimony sites with several options and filters to narrow down your search for the perfect one for you!