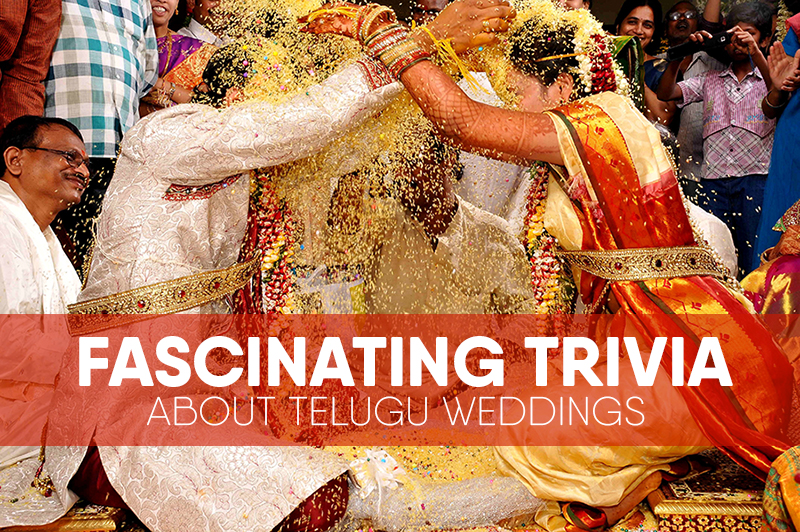 Telugu weddings are all those weddings that take place in the state of Andhra Pradesh or Telangana as we now call it. Telugu matrimony follows all the traditional Hindu rituals of weddings and is an extravaganza in its own right! Attending a Telugu wedding gives you a sense of being transported into a world of luxury and undeniable opulence. Like every couple, Telugu bride and groom also await to tie the knot and step into their matrimonial life with a lot of pomp and show.

Let’s check out some fascinating trivia about Telugu weddings that you probably didn’t know!

1. Initially, Telugu weddings used to last close to 16 days according to the ancient Telugu traditions. However, in the present day, Telugu wedding ceremonies take at the most 2-3 days.

2. The cast of the Indian groom and the bride usually determines what kind of matrimonial ceremonies would be performed during the wedding.

3. The invitations for the wedding are not sent via mail. The families of both the bride and the groom personally visit the houses of the guests with kumkum, which is a colorful red powder.

4. There are several interesting pre-wedding rituals in a Telugu wedding. One of the many rituals includes Snathakam where the groom is supposed to indulge in a holy bath a few hours prior to the wedding. This bath is a sort of graduation for the groom for his changing status from bachelorhood to a householder.

5. Kashi Yatra is another absurd but equally amazing pre-wedding ceremony that happens in a Telugu wedding. In this ceremony, the groom declares his celibacy and then expresses his great desire to travel to Kashi or Varanasi in order to pursue higher studies. However, this is when the bride’s brother comes into the picture and stops the groom from doing so, requesting him to reconsider the decision he has made and then marry his sister. This ritual is super light-hearted and creates a bond and a camaraderie between the future husband-to-be and his brother-in-law. In the end, the groom, of course, agrees to marry the bride and live happily ever after.

8. The groom needs to ride an elephant to the wedding ceremony traditionally. However, with the passage of time, fewer people are following this ritual in Telugu weddings.

9. Kanyadaan is a popular wedding ceremony in which the family gives away the bride to the groom and his family. During this ceremony, the bride’s maternal uncle brings the bride to the wedding venue in a basket made of bamboo.

10. The bride’s parents are also supposed to wash the feet of the groom because he is considered to be the incarnation of Lord Vishnu.

These are some interesting pieces of trivia of things you can expect at a Telugu wedding. If you are also looking for a Telugu bride or groom, you can visit various matrimonial sites or matrimony sites to find your soulmate.