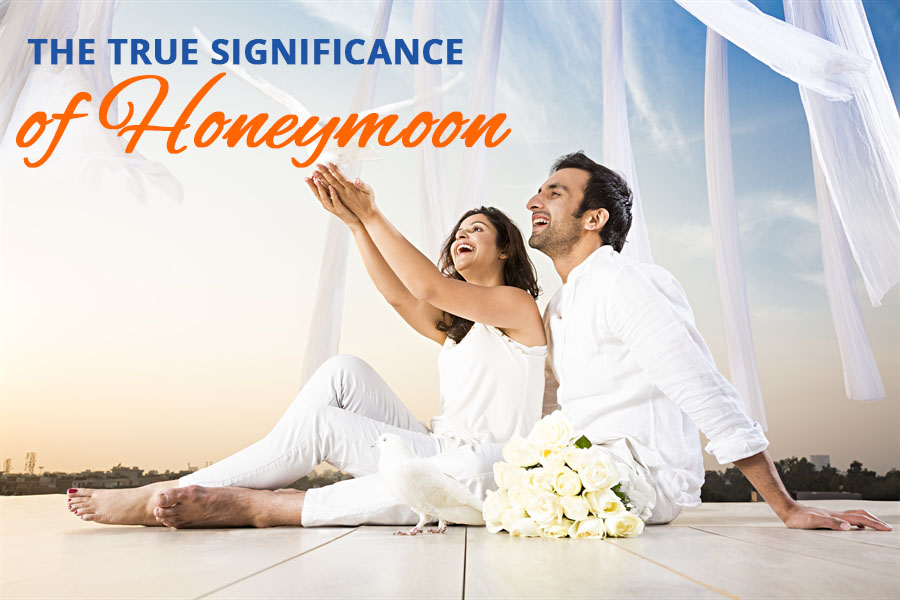 The word ‘Honeymoon’ has its etymology in the Old English phrase “hony moone.”. In Old English, Hony meant honey, and it was used to indicate the “special phase of loving sweetness and tenderness and conjugal pleasure lived out by newly weds. The other word Moone, in contrast, indicated the matter of fact fleeting nature and a waning phase of that same sweetness. As you can tell, this word didn’t have a positive connotation, as we have about it today. It was almost a phrase of cynical warning about the sweet marital love soon waning like the Moon.

However, instead of focusing on this aspect of the word, let’s perhaps look at another ancient and a more optimistic context of this word’s origin.

Around the 5th century, most ancient societies used the lunar cycle as their calendar time. Back then, it was a mandatory custom for newly weds to drink customary Mead (a honey based alcoholic drink that was said to have aphrodisiac elements) during the first moon right after their marriage, in order to help enhance libido in the couple.

A few more centuries down the timeline, the concept of honeymoon was again much different from the present day custom where couples go away just by themselves. In the 1900s, in Great  Britain, newly weds would go on a post matrimony tour, visiting relatives and  friends who had not been able to attend the wedding. It was in fact a special time to forge new bonds – between the newly married themselves, and also with their friends and families.

Although culturally often honeymoon is seen as a solitary sexually passionate getaway for newly weds,  the real essence of the period called “honeymoon” is not so much about conjugal passion, rather about striking a fresh friendship, understanding and mutual compassion!  As two entirely different people join each other’s lives, every couple most definitely need time to understand each other more, adjust with their new roles (as husband and wife from boyfriend and girlfriend / lovers ) , with the other person’s minute details and habits that, regardless of how long one has been dating, can only be understood and learnt while staying with them under the same roof. This needs ample time, single minded dedication, effort and space. Therefore, to simply allow fostering of this newly readjusted friendship and bond between the pairs, which becomes impossible when back on the daily household and workplace grind, the custom of honeymoon still serves as a vital and pivotal nuance.

Even in ancient India, right after the wedding NEVER came the proverbial passionate first night! According to Vedic tradition, the ceremony of Garbhadaan, offering one’s womb to the husband’s lineage (the first conjugal sexual act) was conducted only half a lunar cycle after the big day. This interim period was meant for the newly weds to strike a deeper friendship, understanding and genuine love for one another. Our ancient cultures understood that more than physical pleasure and attraction, what served as a solid foundation to matrimony was mutual understanding, friendliness and trust. And every couple was hence given ample time just after the matrimonial ceremonies to forge that bond first. Even today, this perhaps should be the Real essence of this exclusive time called Honeymoon that every newly wed is blessed to have – a time not just for passion running wild in wild exotic settings, but also a time of forging stronger bond and trust and intimacy.

So, what do you now think about honeymoon? We at LoveVivah love to bring you such meaningful information, because we are committed to help you find the most meaningful relationship if your life. We value matrimony as sacred and hence take utmost care to bring you our best listing of Indian Bride and groom from all over the country.

The profiles on our matrimonial site are linked with Aadhaar card. We take this additional care to ensure that every profile you explore is worth your time and effort. Hence, Aadhaar linking to your LoveVivah profile is made essential.