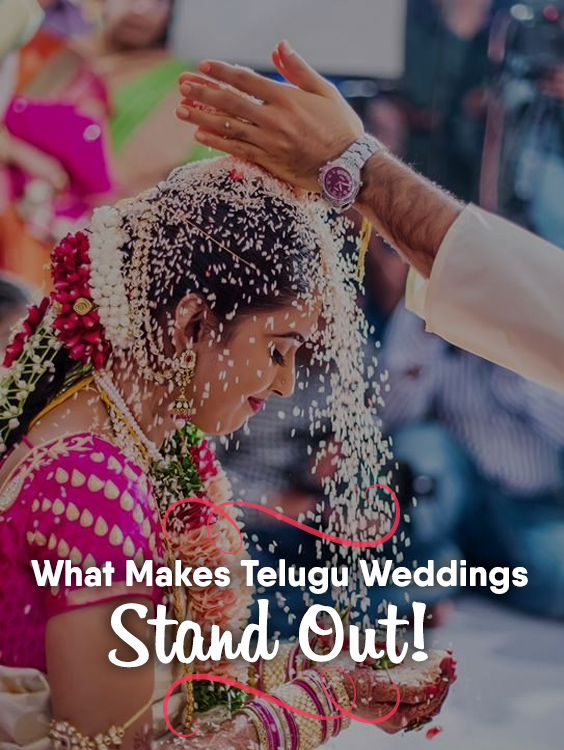 In India, every region has different types of traditional wedding rituals. Since both are from the South, Telugu weddings are pretty similar to the Tamil wedding ceremonies. However, some unique nuances make a traditional Telugu wedding stand out!

Traditionally, any Telugu wedding is deemed complete only if the women participate in the proceedings. Telugu traditions pay utmost respect to women and consider them equal to men with regard to wedding and family life.

Typically, a Telugu wedding will have eye-dazzling jazzy décor with quite a lot of predictable themes such as a ceremonial backdrop of Tirupati Balaji and Shree. Usually, the wedding canopy is extravagantly decked in ‘gold’ and rich, pompous décor. Nischitartham, the Telugu version of a ring ceremony is another pompous affair. The grandeur of the Nischitartham ceremony is usually unparalleled in its aesthetic.

A day before the wedding, the bride and the groom have their Mangal snaanam, which is a sacred bath to mark the passing away of their single lifestyle and progression into married life. The women of the family bathe the bride and then offer Aarti to the deities. The bride worships Lord Ganesh and Goddess Gauri at her house. She prays to Gauri Mata to seek blessings for her conjugal bliss. The groom, on the other hand, is made to wear the sacred thread and readied for the wedding in his own house. The groom also performs a Ganesh puja to ward off any bad luck or evil.

The Bride in A Basket

Another unique feature of a traditional Telugu Matrimony is the bizarre custom related to the entry of the bride to the wedding hall. A Telugu Bride, in some sub-sects and communities of the Telugu people, is brought to the Mandapam in a wicker basket by her maternal uncle! It is indeed a sight to behold! A Telugu Bride, dressed gorgeously and looking ethereal, is seated in a big wicker basket and is carried into the wedding canopy by her family! The groom is seated at the altar while the bride, richly decked, arrives in a bamboo basket, carried by her maternal uncles. The scene can be relished as an old customary fun exercise. But some modern thinking Telugu brides have begun questioning this particular ritual as a patriarchal and sexist objectification of women, depicting the girl to be some material object being brought in as a basketful of a material offering to the groom. But this debate aside, such a strange spectacle does make a traditional Telugu wedding stand out!

Another tricky, rather sticky unique feature of the Telugu ceremony is the ritual of Jeerakalla-Bellamu. Once the bride is at the Mandapam, a curtain is placed between her and the groom. Then, the priest begins to chant the sacred wedding mantras. It is then, at that auspicious muhuratam, the bride and the groom, facing each other, but unable to see each other due to the curtain, are each handed a leaf with the stickiest blend of cumin seeds and sweet jaggery. The couple then places this sticky concoction on each other’s heads while the curtain is removed from between them. This bizarre ritual, an intrinsic part of every traditional Telugu wedding, symbolizes the unbreakable eternal bonding of the couple, just as the sticky and hard to separate mix of jaggery and cumin. The symbolism really stands out, even days after the actual ceremony as this strangest symbol of unbreakable bond simply won’t wash out of the couple’s hair for the next few days.

In this beautiful ritual, the traditional Telugu bride is made to wear a red-bordered cotton saree and the groom, a red-bordered white cotton dhoti. The color combination symbolizes purity, strength, and passion and this is the authentic traditional Telugu wedding attire for the bride and the groom. Thereafter, the groom ties a mangalsutra around the bride’s neck and precisely ties it in three knots, symbolizing the couple’s tripartite, mental, physical and spiritual union.

More Stuff on The Head

In another unique ritual of Talambralu, both the bride and the groom are handed either handful of pearls or turmeric-mixed rice by the priest. The couple cups their hands, and as the pearls or rice is poured in, they hold it. Then, both simply pour it all over each other’s head as a priest keeps chanting the sacred mantras.

Another uniqueness of the Telugu wedding ceremony is that it is a really long affair that usually takes up more than a couple of hours. This is all the more why in between such long-drawn ceremonies, the traditional Telugu wedding is interspersed with various fun games incorporated to keep the ceremony lively and the guests amused.

Nearing the end of the ceremony, the Telugu groom is supposed to slide a pair of silver rings onto the toes of his bride. This is yet another symbol of the man claiming the woman as his wife. Another fun game is where the priest, at this juncture of the ceremony, puts the couple’s wedding rings inside a pot full of colored water and the couple is supposed to hunt these out. The custom requires that the couple put their hands into the pot simultaneously and whoever, between the two, find the rings first is believed to be the dominant one in that marriage.