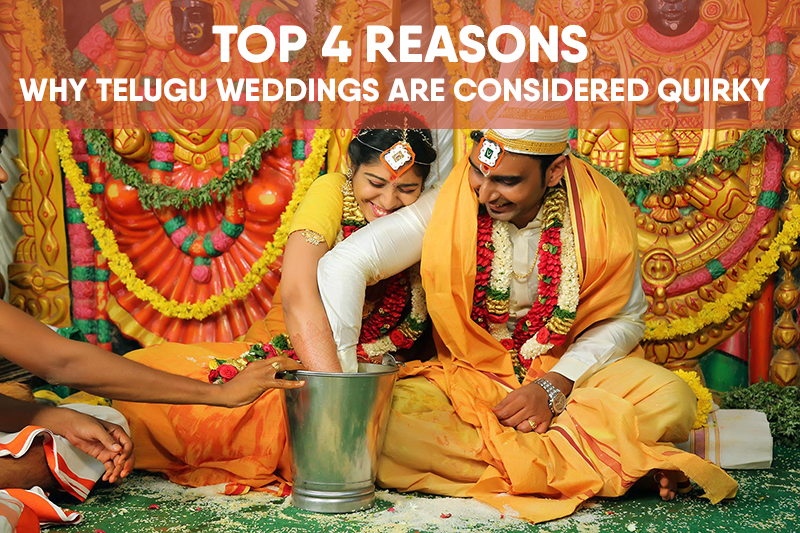 Matrimony in India is usually a grand event, and it feels like it comes straight out of a fantasy romance novel. Each region of India and each Indian community has different ceremonies, customs and wedding rituals that make it stand apart from the rest. However, when we talk about Telugu weddings, they are definitely a class apart where the “quirky” quotient is concerned. If you are looking forward to attending a Telugu wedding in the near future, brace yourself for a very long ceremony packed with rituals and rites. You are going to be witness to a whole lot of quirky practices but loads of sumptuous food as well.

Read on to discover some of those practices!

1) The arrival of the bride is in a basket.
Yes, you read it right! The groom is found seated at the altar when the bride arrives in a basket in all her glory that is carried by the bride’s uncles. It is almost as if the bride is being offered to the groom in a basket, which she is! That said, it makes for a fun and entertaining exercise as the bride is showed off on her way to the altar, wearing a flower braid and decked in gold.

2) Sticky blessings are given and received.
At the moment of the auspicious time or the muhurat, the groom and the bride sit opposite each other, facing each other. A curtain separates them to ensure that they cannot see each other. Then, just as the curtain is slowly removed from their midst, both the bride and the groom place a leaf on each other’s head that contains a mixture of cumin seeds and jaggery. This ritual signifies the eternal bonding and ties between two individuals, much like cumin and jaggery. This is an unbreakable bond for their matrimonial life to come.

3) The groom gets cold feet and decides to flee.
This ritual is known as the Kashi Yatra in which the groom pretends to renounce all the material gains of the world and go to Kashi to live the life of a celibate. This is when the bride’s brother mock pleads with the groom to reconsider his decision and marry his sister. The groom, after much persuasion, “agrees” to marry his bride and the wedding rituals continue.

4) The wedding games
It is no secret that Telugu weddings tend to go on for a very long time which is why there are several games incorporated into the days to keep everyone amused. One specific game which is also a ritual involves the groom and the bride showering each other with handfuls of rice kernels during the recitation of prayers by the priest.

These are some weird yet quirky rituals that take place in Telugu weddings. If you are also looking for a Telugu life partner for yourself, why not avail the services of telugu matrimonial sites? Matrimony sites have helped people aplenty to find their soulmates throughout the world. So, why not try it out for yourself?