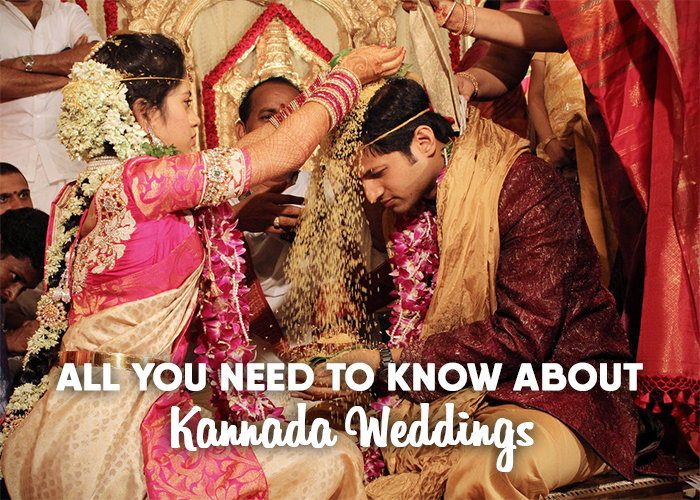 Here are all the details you need to know about an authentic Kannada Matrimony  wedding!

It is the event that follows after matching the horoscopes of the prospective bride and the groom. A match is fixed only when the horoscopes align perfectly. For the event of Nischay Tamulam, the groom’s parents come to the bride’s place with saree, fruits, coconut, and sweets. In turn, the bride’s parents also visit the groom’s place and bring him a white dhoti, and similar edibles. This ceremony is equivalent to the engagement ceremony. The date of the marriage is fixed during this event.

The Blessings of Naandi

The ceremony of Naandi is a pre-wedding ritual that takes place in both the families. A traditional copper ‘kalasha’ (pot), filled with water is placed with a coconut on the top to symbolize Amrit (the elixir of life). Then, puja is performed seeking the happiness, abundance, wealth and health of the couple.

The Pretense of Kashi Yatra

This fun-filled ritual is the same throughout South India, as is found in Tamil and Telugu weddings too. Here, the groom feigns disinterest in life, feeling angry that his family has not found a bride for him. He threatens his parents to leave for Kashi. He is given a walking stick, an umbrella, a fan, his dhoti and some minimum edibles for his journey. But just as he’s about to depart, his maternal uncle convinces him not to leave and promises to marry him to the bride chosen for him. The groom changes his mind hearing this and decides to get married.

The wedding attire of a traditional Kannada bride is gorgeous and ornamental. The bride has to wear the traditional 9 yards (Naavari) sari and green glass bangles, along with other gold ornaments such as the Mangtika, jhumka, necklaces, and Kamarbandh which is a gold belt around her waist. Her hair is done in a traditional high bun and braid, which is decorated with plenty of flowers and then covered in a veil.
On the other hand, the Kannada groom has to wear a white veshti (dhoti) of cotton or silk with a thin border, wrapped in the South Indian style. Alongside the veshti, the groom dons a kurta. However, during the wedding rituals, he changes his kurta into a white silk scarf, the Angavastram and a turban known as Pheta. He also holds a specially blessed stick in his right hand.

This ceremony is equivalent to Kanyadaan of the North Indian weddings. Here, the bride’s right hand is placed on the groom’s, and then a betel leaf and a coconut are placed on the top. The bride’s parents then pour sanctified water from the Ganges on top of the joined hands holding the coconut to symbolize parental blessings for the new union.

This is yet another common wedding ritual across all traditional Indian weddings. After the nuptial knot is tied between the couple’s clothes, the couple is made to circumambulate the wedding yagna (fire) seven times and hence, it is known as Saptapadi (seven steps). Thereafter, five Sumangalis (auspicious married women) help the groom in tying the mangalsutra around the bride’s neck. The marriage rituals get completed with this step, and the couple then seeks blessings from the elders.

Every traditional Indian wedding has their unique post-wedding fun games and gatherings. This helps the newlyweds to get to know each other and their family members and friends and also find some relaxation and bonding.
In traditional Kannada weddings, after the main marriage ritual is completed, Okhli is played between the two families to break the ice of formality. Here, just as in Telugu weddings, the groom’s ring is dropped into a vessel filled with colored water or milk. The bride finds the ring three times consecutively to symbolize her mastery of domestic challenges that might crop up in her new life.

The specialty of a traditional Kannada wedding feast is that it is served on banana leaves. Another unique heartwarming ritual is that the newlywed post-wedding, eat their wedding feast from the same leaf that is laid out surrounded by colorful rangoli.
The authentic Kannada wedding meal begins with the mouthwatering payasa, with tuppa (ghee) poured over hot steamed rice. Several types of traditional vegetables, pachadi, sambhar, vade and rasam are included. The famous bisibelebath for desserts, to celebrate the sweetness of the couple’s union, the famous chiroti, obattu (Indian bread with coconut filling) and the even more famous Mysore pak are served with extreme generosity.

Finally, the bride has to bid an emotional goodbye to her paternal family and set off for her new home. This ceremony, all across the country, is known as Vidaai. But among the Kannada people, the new bride’s people send her off to her in-law’s house, accompanied by her brother. The brother stays at the groom’s house for the night and comes back the next day.

Griha Pravesh (The Bride’s Welcome to Her New Home)

This is yet another familiar Indian traditional post-wedding ritual where the new bride is given a ceremonial welcome into the marital home. The mother-in-law welcomes her with an aarti. As with North Indian wedding rituals, a pot brimming with rice is placed on the home’s entry gate, and the bride while entering her new home is supposed to touch the pot with her right foot and turn it over, spilling the rice at the threshold. This symbolizes her auspicious arrival that will make the home prosperous and overflowing with wealth.

A typical traditional Kannada wedding looks beautiful, lyrical and heartwarming. It doesn’t stun the mind with an excess of pomp and extravaganza. Rather, it fills the heart with simplicity, subtlety, and warmth of meaningful rituals that are deep-rooted in the ancient Indian cultural nuances and spirituality.