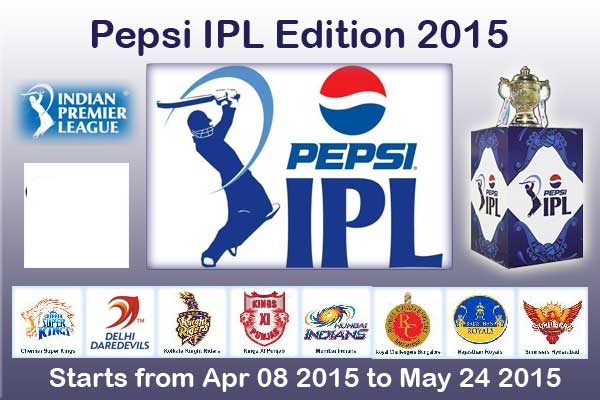 Cricket is the most popular sports in India which attracts the youth for more improvement in the Global standard. Indian national cricket is monitored by the Board of Control for Cricket in India (BCCI) authorized which headquartered in the Mumbai, India. BCCI selects and controls all the cricketing activities across the country through the state boards in the respective states.

BCCI is organizing cricket tournament Indian Premier League season 8 (IPL 8) in this year 2015. Tournament with matches is arranged across cities in India from date 8 April 2015 will be continuing to 24th May 2015. Total 60 no. of Twenty20 cricket matches is scheduled among the 8 franchised teams.

Franchises team management take part in auction of the Indian and International players for their respective team selection. The IPL 2015 is included with 13 Indian umpires and 4 match referees for managing the entire tournament. Each IPL team players have minimum 7 no. of Indian players and maximum 4 foreign players. Kolkata Knight Riders (KKR) is defending champions of IPL 2014 season. For more detail information about the IPL 8 season you can login to https://www.iplt20.com/

Please check franchised team name, city and home stadium are given below.

LoveVivah.com team wishing best of luck to every team to perform and play with spirit of game.