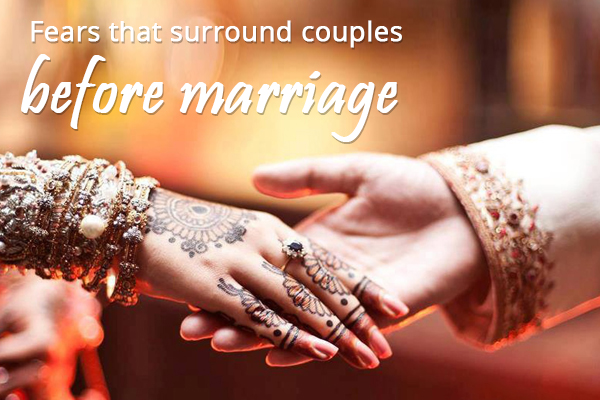 For any young girl or boy in marriageable age, the word “marriage” is sure to shower a beam of excitement. It is worth a mention here that this excitement is most of the times accompanied by an unexplained fear. The family, surroundings, social circle, individual state, personality and many more factors club together to craft an opinion about marriage and related extents. A positive environment develops an optimistic view about marriage whereas negative environment or some undesirable experiences develop a pessimistic view about marriage leading to fear factor.

The common fears that usually haunt a person before getting married revolve around either of the below:

Two strangers who have not even known each other till a few days back and now they are proceeding with a lifelong commitment to stand by each other in all ups and downs of life. The fear of your partner accepting you with all your good and not so good qualities is quite justified. Not only this, but there is another layer of acceptance that matters – acceptance by in-laws, which is again a big concern of fear.

Fear of partner cheating on you

Even when couples get to spend time with each other during the courtship period, still there is a probability for either of them not disclosing or revealing all the instances from their past. Any previous crush or affair that might have been a serious one or has a tendency to bloom into a serious one, might not be discussed openly. Such fears do haunt a soon to be married person.

Failure in marriage for any reasons whatsoever is the most devastating thing that can ever happen to a couple. Even when everything is going as per your expectations, still there remains an undefined fear of unexpected that can mar your happiness.

Being a witness to any adverse marital relationship in the known social circle is confirmed to act as a seedling to the fear of your marriage being an emulation of theirs. Though each couple is unique and every marriage is distinct from the rest, still the mind hovers around speculating a resemblance with others and giving rise to futile fear.

And the fear of the unknown (What will marriage be like? How will things shape up after marriage? and what not)

As a basic human tendency, we always tend to fear about what’s not known to us. Yes, the Fear of Unknown. For a person tying the nuptial bond, there is a whole lot of new world that’s about to open up post marriage. The new world, which is unique to every couple and no one can give you a clue about how things will shape up for you post marriage. Its like you need to jump in deep waters to taste it.