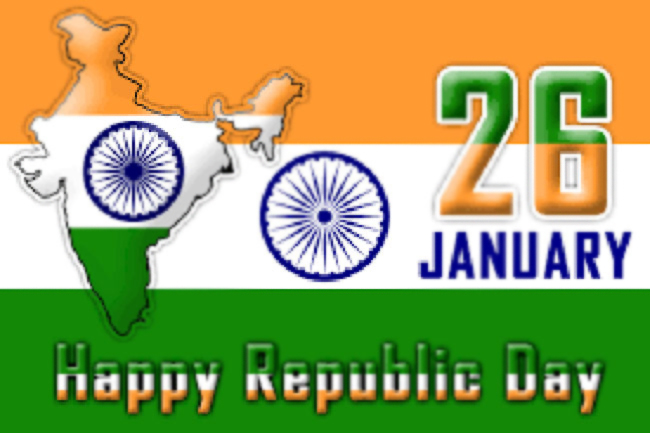 The Republic Day function is conducted at Rajpath, India Gate in the presence of Honorable President of India. Various defense forces, states, government departments and school kids perform in the ceremonial parade every year to celebrate the Republic Day of the country. This shows the unity in diversity and cultural heritage of our great country. This parade also displays the defense and military capability, cultural heritage and research innovation of India. The celebration of Republic Day continues for three days and ends on 29th January.

The Beating Retreat is special and conducted on the last day of Republic Day celebrations. It is a kind of formal closure of the three days long celebrations. Military bands of all three wings: Indian Army, Air Force and Indian Navy take part in this ceremony. This whole ceremony is conducted at Raisina Hill, President’s House in the presence of Honorable President, all military chiefs, Prime Minister and other dignitaries.

The first republic day celebration was done in 1950, that was the first time when India celebrated it’s Republic Day. Every year we invite a chief guest or guest of honor from some other country. The Head of that respective country attends the whole function as chief guest of Honor. However, everything was done in the respect of country and the President of India presides over the whole ceremonies. President’s Bodyguards give the National Salute to the chief guest (Head of the Govt of friendly nation) where the leaders are escorted by President’s Bodyguard on horse as per protocol. Indian National Anthem “Jana Gana Mana” is played by the Army bands. Also Mahatma Gandhi’s favorite hymn “Saare Jahan Se Achcha” is also played. The ceremony starts with the floral homage given by the Prime Minister of India at Amar Jawan Jyoti (memorial to soldiers) at India Gate in the tribute to great martyr soldiers of India.

This historical Republic Day celebration is observed in every part of the country. This ceremony reflects the national strength, integrity, growth and stability of the country. Every state organizes the National Flag (Indian Tricolor) hoisting ceremonies, parades by armed forces on the day. There are various patriotic competitions, debate, essay writing and cultural functions are conducted in education institutes for celebration. Shopping Malls, market places, NGOs and private organization celebrate this special day in their own ways like asking people to wear clothes in tricolor clothes or something else.

Loveivivah.com matrimony website wishes Happy Republic Day of India to the people of the great nation.